Showing posts from October, 2016
Show All

Is That the Best You Can Do? 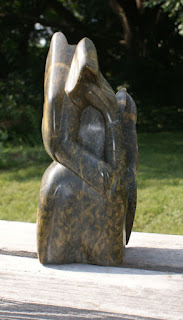 As we were setting up our first ever sculpture show, my partner, Laura, and I, were photographing the pieces. Noticing the absence of one of my oldest sculptures during the photoshoot, Laura asked, "What have you done with The Ponderer ?" "Oh," I said, "He's on the shelf in the guest bedroom downstairs." "You should bring him up for the photos." By the end of the day, he still had not appeared. "I'm sensing that you don't like that sculpture very much?" she said. I agreed. But she didn't let it go. "What don't you like about it?" "It's just I dunno, it's just blocky and dull." Laura nodded agreement. "Sorta grey?" Ponderer - 2015 "More swampy. I thought it was going to be so spectacular when I was working on it and then, when I polished it up, it was just sort of mud coloured." That conversation while setting up for the sho
Post a Comment
Read more
More posts