Is That the Best You Can Do?

October 27, 2016
As we were setting up our first ever sculpture show, my partner, Laura, and I, were photographing the pieces. Noticing the absence of one of my oldest sculptures during the photoshoot, Laura asked, "What have you done with The Ponderer?"

"Oh," I said, "He's on the shelf in the guest bedroom downstairs."

"You should bring him up for the photos."

By the end of the day, he still had not appeared.

"I'm sensing that you don't like that sculpture very much?" she said.

But she didn't let it go. "What don't you like about it?"

"It's just I dunno, it's just blocky and dull."

"More swampy. I thought it was going to be so spectacular when I was working on it and then, when I polished it up, it was just sort of mud coloured."

That conversation while setting up for the show stuck in my head, and got me thinking about ways to make it less blocky. I brought it upstairs and started looking at it critically.

I needed to add more detail to make the sculpture effective from all angles. So, I took it out to our workshop and went at it with the rasps, adding a curve here, a scallop there, and paid lots of attention to things like harmonious planes and angles and exposing different layers of colour.

Laura had pointed out that I never even bothered to finish the back of it properly. The part of
the surface that had been left raw was as exciting as concrete. I felt that I should make the shape even more dynamic to make up for the dullness of the colour. But as I got down to the sanding stage, I remembered how high my hopes had been for this sculpture - because the colour and marbling were incredibly vibrant and translucent and transforming – a vivid bolt of golden lightening running through it.

I decided that if I could see all the rich colours and organic detail while sanding, it had to be possible to make it visible in the finished sculpture. 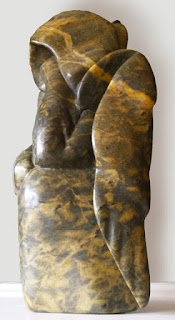 I just needed to do a better job of buffing and waxing. We had much finer sandpaper available now than we had when I had first worked on The Ponderer in 2010 or thereabouts. The three grades of paper I'd used had finished the piece to a high gloss, but left the viewer with the feeling of glimpsing the colours through six feet of pondwater. If it was possible to bring out the colours, I swore to do it. 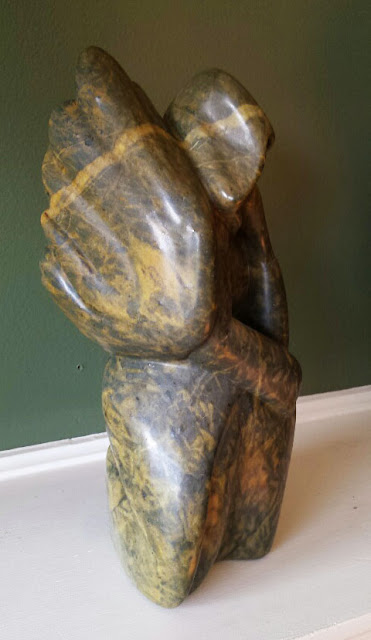 It has become one of my most impressive pieces. The Ponderer struck me as a rather ponderous name for a sculpture with so many dramatic curves and planes and angles. Now, the stone doesn't just speak – it sings in ancient tongues. I thought maybe, Reflector would be more appropriate. Two years ago, I had completely given up on this sculpture and declared the attempt an artistic misstep. Now, it's clear I was on the right path all along, but didn't trust my own instincts and abilities. I had told myself "This doesn't work," rather than asking myself, "Why isn't this working?" or "How do I fix it?"

The same technique should work on stories.

Why isn't this working? Because it's too expository, doesn't draw the reader in, has shallow characters, ends where it should be starting...yada, yada, yada. If I find an answer, I'll ask myself  "How do I fix it?" And then do it. So simple, right?  Why don't I do that all the time?

Because it works best with a special set of circumstances. It has to be something that inspired me to work at the highest level possible for me at the time. And which I have since gained the skill to execute much more professionally. Revisiting that sculpture made it so clear what I needed to done and I am so grateful to Laura for urging me to do it.

perseverance sculpture self-confidence
Psychedelia Gothique - Dale L. Sproule
I write literature of the fantastic. My short story collection, Psychedelia Gothique is mostly psychological horror. My just released novel, The Human Template is available through most online book retailers - and book two of the diptych, The Carnivorous Forest will appear in 2021. https://www.dalelsproule.com As a book reviewer I have written for Rue Morgue Magazine and AE Science Fiction. As a visual artist, I have illustrated books and magazines and have carved numerous sculptures out of stone.