Showing posts from July, 2018
Show All

July 26, 2018
Television has always been filled with one hour dramas featuring the full range of modern heroes: doctors, nurses, police, firefighters, soldiers.   Most of them don’t reach too high. I can’t count the number of times I’ve watched a show like Criminal Minds or Castle , only to realize partway through that I’d seen it before. Or the number of times I thought I’ve seen it before only to figure out that it was actually new, but the plotline was so tired and overdone that I’d might as well have seen it. Frankly, the lack of imagination bores the hell out of me. Historical dramas are somewhat better. The best ones find ways to pump new life and new insights into old stories. And stories set in the French court, Victorian England, colonial Africa or the dawn of humankind - depict cultures I’m not overly familiar with. I get a bit irked when someone gets into bed in a medieval castle and their bed linens look like 300 threadcount sheets from WalMart - . Part of making a good historica
Post a Comment
Read more

Outlining The Path Ahead

July 21, 2018
It’s easier to write about stuff when you’re actually going through it – so I’m going to save my blog posts about self-publishing until I am actually back in the throes of doing it. Approach it like a reporter. In fact - that's what I will do with the whole publishing process.  Ergo, Avenging Glory will be coming out as a novel sometime in the next few years. Whether or not it will be published is not the question - the only question is, how? Traditional, hybrid, or self-published?  For the first while, I will be exploring the traditional route. If and when I do hit paydirt and start down that path, the process will be considerably longer – most likely entailing the hiring of an agent, the search for a publisher, working with the agent and/or editor on the mss, and then ultimately publishing the book, a pipeline I have been told can go on for as long as three years. If I self-published the entire project, it could be done in a window as short  as a few days – but sin
Post a Comment
Read more

The Pirates of Publishing 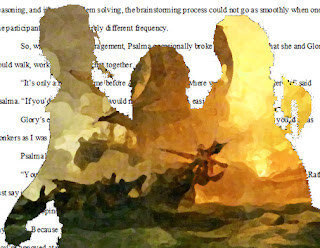 Pirates? Arrrr, matie, pirates! And they’re taking over the publishing world. Hold onto your purse because the publishing waters are full of cutthroats. With the ever evolving publishing paradigm, the big publishers have closed ranks – so that it’s harder than ever to get in. If you have a phenomenal track record or (or a really big cannon) ... or present them with a book that seems like a sure-fire winner, you may be able to break down the doors. Otherwise, your chances are akin to a dinghy in a hurricane. So, what options are left for new authors? Small publishers for long fiction or collections are all looking for breakthrough books. So write a breakthrough book. That was easy, eh? But even that may not work, if no-one recognizes it as a breakthrough book. And publishers that can see and cultivate the “potential” in unpolished gems disappeared sometime last century. You’ll need your manuscript sharpened like a rapier – which means spending money on it upfront. Like th
Post a Comment
Read more
More posts