Showing posts from April, 2019
Show All

Visibility is the Key to Success 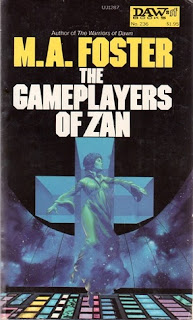 I remember a story I read in Asimov’s when I was just starting out that blew me away and had a huge influence on me. Don’t remember what it was called though. Or who wrote it. Or what it was about. It was stylistically daring, beautiful, and funny. Eager to read more work by that writer, I looked, but couldn’t find any. I moved three or four times, and the magazine got packed in this box or that, and almost certainly wasn’t in any of the boxes that moved with me across the country. I wish I could remember more about it, because it deserves to be read again. Around the same time, I read another cool story - this one about an artist working in new media. This was a couple decades before PC’s. The main character made or watched a film starring a number of top actors from various points in Hollywood history and had an original soundtrack by Peter Gabriel (it was a far future story). The author’s name was M.A. Foster. After getting excited about the story, I looked for the nam
Post a Comment
Read more

April 13, 2019
How do you find beta readers? I'm sure the answer to that is different for every writer. The one thing everyone tells me is that once you find some good dependable beta readers who give you good feedback and are happy to do it - you should do everything you can to hold onto them. How many beta readers do you need? I know people who have just two. And I know others who put it out to a large number with every book. I'm still looking, so I'm pretty sure I have more than I need for this book. But I'll winnow that down for the next one. I have a crew of friends and loved ones I go to for help and advice at different stages, but it's important to me to have beta readers who are reading the manuscript for the first time. When I ask people to beta read for me, I often have to explain the concept of “beta-reader.” Beta-Readers are essentially a hand-picked sample group. What the writer needs you to do is read it as though you just dropped the full cover price to buy i
Post a Comment
Read more

Getting a Book Ready for the Beta-Readers

The longer I work on something, the more likely it is I’ll drift at some point into a creative doldrums, where I spend days or even weeks,   tweaking this, tweaking that, agonizing over a single phrase, sometimes a single word, writing in circles, rewriting the same scenes over and over and then finally just deleting them. But if I don’t lose hope, if I keep at it long enough, I generally catch a favourable wind at some point that fills my sails and carries me very quickly – sometimes almost out of control – to the end of a story or chapter. Sometimes the storm of inspiration and enthusiasm dies down suddenly, other times, it carries me right into the next chapter or next project. But one thing it almost inevitably does, is give me an unduly optimistic feeling about what I’ve just written. You’d think Shakespeare himself never penned such a masterpiece! I generally get over this quickly – usually as soon as I start to reread it. But every once in a while, the work turns out
Post a Comment
Read more
More posts