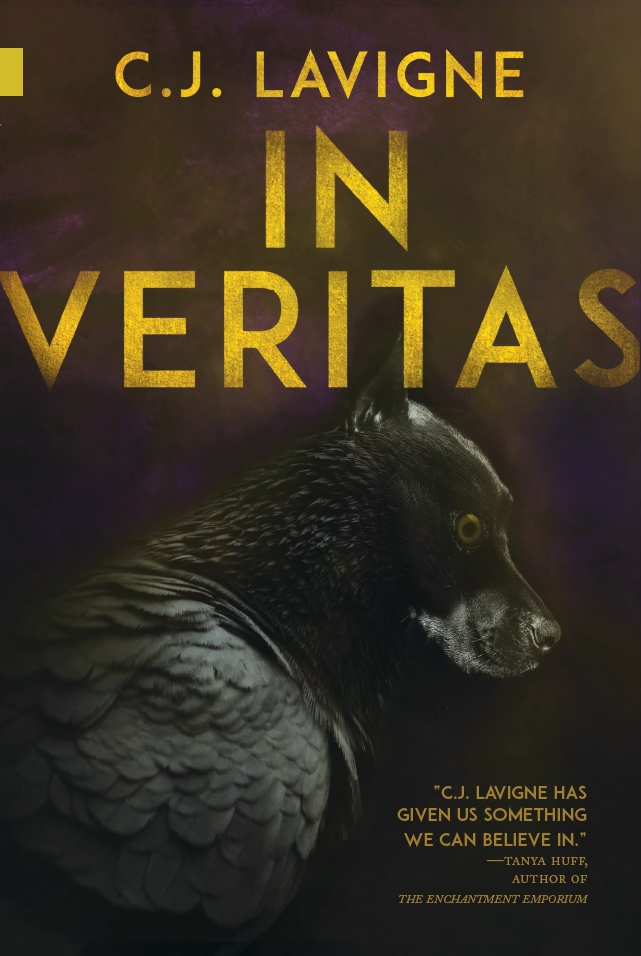 I am not a particularly fast reader, but I did spend an unprecedented amount of time immersed in C.J. Lavigne’s debut novel, In Veritas.

It is a story ostensibly about communication in which the major character, named Verity, is pretty much unable to communicate in the usual manner. The crossed-wires in her brain give her a severe case of synesthesia which lock her into her own somewhat non-sensical world and contributed strongly to making her an outcast from a very young age. – with the added complication that people have an impossible time lying in her presence.

She escapes from incarceration in a mental health facility with Jacob, a wealthy young man who seems to be somewhere in the autistic spectrum. Having been cheated out of control of his family fortune, he does pretty well on the stipend he receives. Jacob and Verity live together in an affectionate - although emotionally distant and seemingly platonic -  relationship where he switches career paths every five minutes and Verity goes along for the ride.

When Verity discovers the between, everything changes. The Between appears at first to be a rock band that everyone has heard of, but no one has actually heard. There are rumours of long ago concerts and impossible to find, limited edition albums. All of their concerts are cancelled before they happen, which builds the buzz even bigger.

Verity runs into a young street magician named Santiago. who has a strange talent he developed as a child, of conjuring beasts out of shadows – a snake and a dog that are both aspects of him and independent creatures at the same time.

He reluctantly takes her to the crumbling McLuhan Theatre where he shows her how to enter a magical space behind and between walls that he refers to as the between.

She meets the inhabitants of the between, including an angel and a ghostly, knife-bearing woman/demon named Jihan. Verity is both one of them and apart from them. But the journey of discovery she is on strongly suggests that she has a looming role in their lives – which in turn gives her a sense of purpose she has never had before. As her abilities start to make sense, she begins to feel valued.

Those who live in the between are a magical people – whose existence is threatened by forces that threaten to exterminate them. Their power has dwindled over the ages and is now almost gone.

Along the way, Verity meets Privya, whose power the reader is told about – but none of the characters in the book can possibly comprehend. Privya is bent on destroying humanity in order to preserve ‘her people.’ The angel and the magician are trying to stop her, while Verity is appropriately caught somewhere in between. And although she doesn’t understand why, she knows that her role is vital.

There is a very powerful moment just before the climax where Jacob realizes that Verity has been lying to him – a discovery that shakes him to his core, because he didn’t believe she was capable of it.

Communication may be the main theme, but In Veritas is also about the nature of truth, and about belonging.

It’s a very odd novel in many ways in that few of the characters have much agency of their own and yet things that need to happen get done.

I’m not sure what happens in the end – or more precisely, I know what happened but am unsure how. Given the themes of this book, this state of affairs is not only appropriate – but inevitable. I suppose. That’s what happens when you have a protagonist for whom roses whistle, tension smells like shattered glass, and dead hippogriffs wash up in the canal.

The themes are all enormously relevant, perhaps even more so because of the seemingly never-ending pandemic that has convoluted our normal means of communication in interesting ways.

In the end, this book didn’t take me those months to read because it was a difficult book. It took me so long because I was luxuriating in the prose and learning a whole new method of processing information.

In Veritas is an amazingly assured first novel that has fascinating things to say and an intriguing way of saying them.