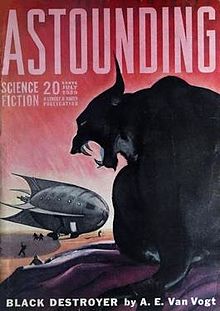 My upcoming project, The Gallowrat is going to be what is called “a fix-up” novel. This was a technique pioneered by Canadian expatriate science fiction writer A. E. Van Vogt in the 1950s – with his book “The Weapon Shops of Isher.”
Considered one of the stalwarts of the Golden Age of Science Fiction, Van Vogt’s was hugely influential in the field. His story, “Black Destroyer” is considered progenitor of Alien and any of a number of SF movies featuring an interstellar monster that treats the human spaceship it's riding in as its personal hunting grounds.
As a close friend and intellectual sparring partner of fellow writer, L. Ron Hubbard, Van Vogt was pulled into the emerging world of dianetics, before it became scientology. Managing a dianetics centre in the 50s took up so much of his time and energy that his own writing production dwindled.
But being a very smart guy, he recognized the strength of his approach to writing. Van Vogt had an unusual kinetic style (credited with being a major influence on Phillip K. Dick). The style may well have been a direct result of Van Vogt’s writing process which involved composing scenes of approximately 800 words that had to perform the function of either adding a new complication to the story or resolving one. That technique was beautifully adaptable to both short and long fiction forms. String a few of these scenes together and you have a short story. String sixty of them together (while introducing the refinement of constantly rising tension) and it becomes a novel.  This allowed him to double dip – making an income from each short story sale and then again when they became parts of a novel.
When he became distracted by dianetics, and his publisher came looking for new novels, Van Vogt was able draw on that earlier technique. He found he was able to tweak and thus join together many of his standalone stories – and even if they hadn’t originally even been set in the same universe, they could be adapted to work as building blocks in a bigger story. This required Van Vogt to create connecting scenes – but that worked well with his process and soon he was stringing stories together and turning them into novels. Many hung together amazingly well and became quite popular. Others were more of a stretch, and his fans no doubt appreciated it when he returned to more conventional writing structures and processes in the 1960s. He put out at least five fix-up novels during the 1950s and occasional fix-ups after that.
Gallowrat was the original POV character in my story, “Razorwings.” With the help of my ex-wife, Sally McBride, I wrote a second Gallowrat story called “The Birthing Blades” that was finally published a few years ago
That led to the idea of the third, as-yet-untitled novella I have been working at off and on for the last decade which will become the bulk of the novel.
A very old story of mine called “All Along the Jabber Walk” jumped up and volunteered to become a Gallowrat story using  diaries that the character has been writing since I created him/it.
And if the resulting book needs expansion, I have two unpublished Gallowrat stories I can draw on for inspiration and material. But I need to give a nod to my man, Alfred Elton van Vogt, for coming up with the fix-up format.