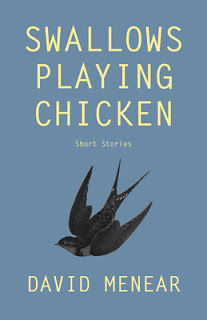 Swallows are beautiful, graceful, free and fragile – a state humans can only ever really approximate when we are children. The game of chicken – for anyone who doesn’t know, is where two fast moving, human piloted objects approach one another at top speed – on a collision course, until one, both, or neither lose their nerve and veer off course at the last moment Even a near miss can send one or both players careening out of control in random directions with results almost as catastrophic as a head on collision. Swallows are probably the fastest and most agile of songbirds. Their ability to evade one another is mindboggling. But the results of a mid-air collision would be like two bullets meeting, probably resulting in a tangled wreckage of bones and blood and feathers. And if the bird they are challenging is their own reflection in a window, their death is blunt and assured. The impact is always devastating.

I, for one, am glad that David Menear was there to scrape together the messy results into this fascinating and always riveting little collection. 22 minimalist stories, each with a single burst of sensory detail leading up to or away from a tragedy that took place in the blink of an eye. It is the readers job to be the forensic investigator – subconsciously pulling apart the tiny remains in search of meaning.

Most of the stories in Swallows Playing Chicken involve loss of innocence, or at least moments of perfect disillusionment. As often as not, they are highly polished glimpses of an instant after which nothing will be the same again.

The stories hopscotch across a broken continuum. The storyteller is often a character named Wayne. In many of the stories there is a mysterious silently crazy sister named Wendy, an older brother named Dennis and/or a girlfriend/wife named Brenda. The Mom is a benign presence that comes and goes as affectlessly as a flickering ghost. When the father appears, he is a malevolent presence; an evil bred far more out of thoughtlessness than intention. In some of the stories, Wayne has no siblings, no wife, no children or lost children. He sometimes briefly has a dog. But the moments Wayne lives through with all of these characters are very brief, intense and real, each one a sensorium overflowing with wistful melancholy – an instant or a habit of inattention leading into a lifetime of tragic tawdriness – 22 slivers sliding under your skin; sometimes unnoticeably, more often festering there. But for me, the real trick is how, when you slice open the flesh to get at them, you find that everything has changed. The story that shocked or irritated you is absent or now means something completely different. For such intense little realities, they are all strangely mutable.  But then so is the reality they depict. The stories in Swallows Playing Chicken will transport you – whether you’re paying attention or not.