Breakout TV in the Year of the Pandemic

As the pandemic wears on, I suppose it’s only natural to start looking for positive aspects, good things that have come about at least partly because of Covid. A number of television series that wrapped just before the pandemic took hold were released as scheduled and some of the early ones didn’t have much impact at the time.

Season two of Showtime’s stellar comedy, Kidding ran in February, which turned out to be somewhat unfortunate timing, since the corona virus probably distracted us from realizing this was one of the best things on television and we had no idea how little good entertainment was going to be released in the coming months. Magic realist, dark, funny; this one’s certainly worth looking up if you haven’t seen it. Watch now and you get to see both seasons back to back. If you actively dislike Jim Carrey, then even the wonderful supporting cast (including Catherine Keener and Frank Langella) may not sway you. But if you liked The Truman Show, even a little, then you shouldn’t miss this series.

Season Three of Phoebe Waller-Bridge’s dark comedy thriller, Killing Eve also aired early in the pandemic. Jodie Comer and Sandra Oh make it very much worth watching, but even this acclaimed series seemed to slip under the radar while we were looking at and thinking about more pressing issues.

The first show to genuinely capitalize on and benefit hugely from the paucity of good entertainment this past summer was probably Netflix’s The Tiger King. I can’t say much about it personally, but lots of people found it riveting.

The summer may have been kinder to The Umbrella Academy than any other scripted series out there. The first season was well-received, although overshadowed by the concurrent broadcast of Doom Patrol. But the second season of TUA hit screens at exactly the right time. New audiences discovered the absurd and twisted fun of this strange anti-superhero concoction that would ever have discovered it otherwise – pushing a franchise that was probably on-the-fence coming into the season to a position of being the number one Netflix show of the summer and winning it an automatic third season renewal. As a big fan since season one, I couldn’t be happier.

I’m delighted to see that the networks were saving up some great entertainment for the fall season, with Lovecraft Country and Raised by Wolves both getting strong starts this fall.

But one of the things that makes me happiest is seeing worthy shows that would probably have passed by without being noticed at all now getting some attention. After reading about it in a number of places, I actually find myself eager to tune into a high school fantasy adventure out of South Korea called The School NurseFiles, which promises to give us a Stranger Things fix until the American blockbuster returns. 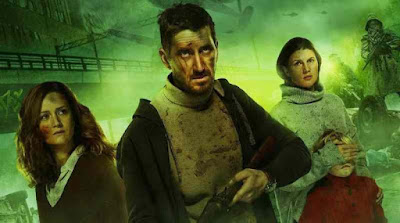 And then there’s To the Lake. My partner, Laura had this loaded and ready to go when I came into the living room the other night. I almost turned it off to go look for something else.  Whoo-boy, I’m glad Laura rewound it to the beginning. I was a huge fan of Russian Director, Timur Bekmambetov’s dark fantasy adventure movies Nightwatch and Daywatch in 2004-06. They were pull-out-all-the-stops rides full of adrenaline, attitude and style. To the Lake captures much of that essence. The show, which aired in Russia as Epidemiya (a 500% cooler title), follows a man named Sergei along with his neighbours and extended family as they flee, not so much from the Ebola like outbreak that has locked down Moscow as the thugs and looters that rose up in the wake of that (are they actually police or military? Who knows?)

So far, it’s seems to draw inspiration from influences as diverse as Walking Dead; The Purge; Run, Jane, Run; and Crank. And I’ve only seen the opening episode.

As grim and terrifying as the situation is, the show is filled with some truly black humour and lots of great and pretty hard rocking music that always seems to juxtapose perfectly with whatever scene it’s inserted into. The little group of survivors on the run is filled with every kind of tension imaginable. I very much look forward to binging this one.

Weak titles notwithstanding, these shows blow most of the domestic content out of the water - although I'm also pretty pumped about CBC's fall release of Son of a Trickster, based on Eden Robinson's award winning books. And the Monsterland series debuting later this month, based on Nathan Ballingrud's phenomenal debut story collection, North American Lake Monsters.

TV series To the Lake Epidemiya
Psychedelia Gothique - Dale L. Sproule
I write literature of the fantastic. My short story collection, Psychedelia Gothique is mostly psychological horror. My just released novel, The Human Template is available through most online book retailers - and book two of the diptych, The Carnivorous Forest will appear in 2021. https://www.dalelsproule.com As a book reviewer I have written for Rue Morgue Magazine and AE Science Fiction. As a visual artist, I have illustrated books and magazines and have carved numerous sculptures out of stone.