I’m curious to see how this web series takes shape as I move on. I’m tired of blogs delivering mini-tutorials on Self-Publishing, while seldom delivering any nitty gritty from the trenches. By sharing my journey, I’m hoping you can find something to take away that helps you on your journey. You can say, “that worked for Sproule, why not for me” or “that didn’t work for him. Should I scrap or tweak my approach to the same marketing challenge?

Here’s one of my biggest challenges – staying organized to help everything come together at the right time. Keeping track of ALL of the marketing efforts I’m making on every front is going to be essential over the coming months.

I have a natural aversion to unnecessary administrative work. Goes against my ADD attention span.

I start a list in one place and leave it on the computer there, so it’s not available over the weekend. Then I start a second list and despite whatever good intentions I may have, the two lists seldom get amalgamated. So then I have two lists. They both get updated, but the updates often only make it onto one list or another. Laura worries that this is another sign of some sort of early stage dementia no matter how often I assure her I have always been like this. In fact, I’ve been getting steadily better as I get older. At least now I am diligent about making lists. Two lists are better than one. And Six rocks.

So Excel, here I come.

Keeping Track of All Readers – in the hope that this will Soon Not Be Possible!

But for now, the sheet keeps track of whomever I’ve approached, the result of that approach – if any, and further action required on my part. Plus the dates of any status change. I can populate the bottom of the list with reviewers I plan to approach and move them up to the proper list as I contact them. Should work.

I also need a list to keep track of the different things I’m doing and the stage they’re each at:

POD version: Draft 2 Digital has announced a beta program to create POD books, but it doesn’t even start until next year and my book is coming out in November. So I need to figure out an interim plan for the reviewers who need hard copies. I’ll probably get a small batch printed at Lulu and pre-sell PODs online, then switch to D2D’s beta program when it becomes available.

I have yet to broadcast news of the launch. This will probably happen at the end of October, or early November. I may schedule some boosted tweets to promote the website in Mid-Oct and then a blast for one or several days in early Nov.  (I’m thinking every two hours – but would appreciate guidance from any Twitter veterans and experimenters who are following or have just discovered this blog series.  As for Facebook, I’ll probably tag everyone on my contact list once to promote the Website – sometime in October and a couple times to announce the booklaunch in early November.

Paid Advertising: Social media promotion all builds up to Facebook and Amazon ads starting just before the launch. Maybe a few bits and pieces elsewhere – ie: a couple of select ad buys from places that seem inclined to be supportive. If any of the ads bring a noticeable ROI, I will repeat until I feel I have reached potential with that venue – or I’m switching the promotion to the new book.

And maybe I should make a list of all my lists. Too much? 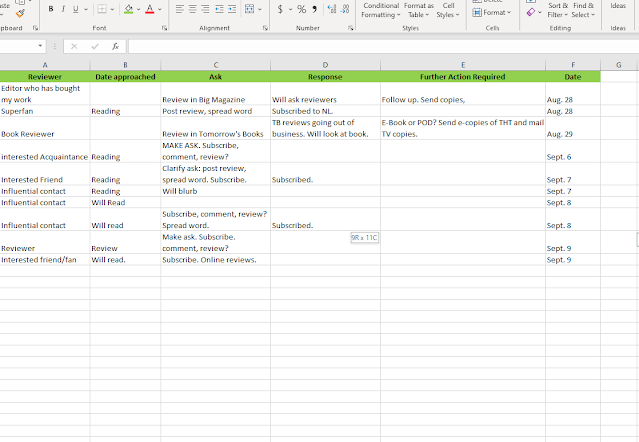