A few weeks back, I mentioned on the listserver for SF Canada (a professional writer’s organization of which I am a member), that I was starting a blog series on self-publishing that was going to essentially be a report from the trenches regarding the challenges and triumphs I encountered on the way to launching my first novel, The Human Template. I was hoping that some other members who are currently going through or have recently gone through the same experience would be will to do guest posts on my blog.

Several of them expressed an interest, so today, I am posting the first of those.

I have long believed that author promotion shouldn’t end shortly after your book is launched and falls short of the bestseller lists. Mahoney is an living example of someone following that conviction. He gave me permission to reprint a post from his blog, assortednonsense.com to detail the most recent and most ambitious part of his marketing journey and I wanted to use it as my first guest post while it was still fresh. Here's Joe's post from Sept 12, 2020.

Yesterday I started a week long 99 cent promotion for the ebook version of my novel A Time and a Place with marketing courtesy of Manybooks. I was the Manybooks Featured Author and you can see advertisements for the novel up their site now. They also promoted A Time and a Place on their Facebook and Twitter feeds.

The Manybooks team has been great to work with and have delivered exactly what they said they would. There was one little glitch when their promo indicated that my promotion price might be wrong, and that potential buyers should double check, but that may have been my fault; it’s possible I indicated the wrong start date for the promotion when filling out the paperwork. I emailed the Manybooks team right away and they corrected the problem within minutes. So, some nice professionalism all round.

But the big question of course is what impact is this having? The fact is making a single book stand out is a herculean task. It’s not like promoting a movie, where you’re only up again other new releases which that year might number in the hundreds. With a book, you’re up against two hundred thousand. Millions, if you want to talk about all the potential books a reader might be interested in reading, cuz they’re not necessarily only interested in new books.

For the sake of other authors interested in marketing who might be following along, I want to be brutally honest as I track my progress. Casual readers interested in books might also want to know.

A caveat. This is just the beginning of the campaign. And I readily admit that I only barely know what I’m doing (unlike, say, fellow Canadian author Mark Leslie Lefebvre, who’s so good at marketing that, look, here I am helping him by name checking for no reason other than his name just popped into my head. Though isn’t that what we should all be doing? Helping to promote one another?) . Figuring out how to market a book properly is like trying to drink a lake. A tasty lake, with delicious fish in it, but it’s going to take a while to get through that lake.

So how are we doing on Day Two? Manybooks has 1870 followers on their Twitter feed (I have 2071). Their tweet featuring me was liked four times and retweeted four times. I’m one of the retweets, and my retweet was liked once and retweeted once. Highly unlikely that the Manybooks tweet generated any sales.

I have no way of knowing the traffic on the Manybooks pages that now feature my book. I can track sales. As of this writing, this effort so far has generated three ebooks sales and one audiobook sale. I can also track some rankings. Right now, A Time and a Place is ranked #328 in Time Travel Science Fiction on Amazon.ca, which is no different than yesterday. It’s ranked 10180 on Kobo in Science Fiction & Fantasy, which is also no different than yesterday.

Here’s the painful part. The Manybooks newsletter promotion cost $39.33. The Manybooks Author of the Day promotion cost $66.45, for a total of $105.78. The revenue generated by the campaign so far (with a promotional price point of 99 cents I get 35 cents for each sale on Amazon) is not enough to even reach the threshold required for Draft2Digital to pay me, though Audible might sent me the 40 percent they owe me for that one sale.

But no matter. This is only the beginning. Today I have promotions with Read Freely and eBooksoda. (Why do I feel like I’m promoting them just as much as they’re promoting me? And for free…) All of this is part of a strategy called Promo Stacking, the idea being to generate buzz in and around the big promotion that happens tomorrow, when A Time and a Place will be a BookBub Featured Deal, theoretically reaching millions of potential readers, as opposed to the smaller newsletters, who reach tens of thousands.

I also want to make it clear that this is not about convincing (or guilting) more of my friends and family to buy copies of this book. Anyone the least bit interested has already done that, contributing to the 500 sales of A Time and a Place that have already happened. This is about seeing if it’s possible to take it to the next level. A little anecdote: shortly after the novel was published, a guy at work asked me what was next. At that time I told him that it was about taking it to the next level. Aware of how challenging publishing can be, he said, “What’s that? Taking sales from dozens to hundreds?” I said, “No, from hundreds to thousands. ”

Even then I had few illusions about how difficult that would be.

If you want to know how the actual Book Bub promotion worked out for him, you can read the next exciting chapter at assortednonsense.com. 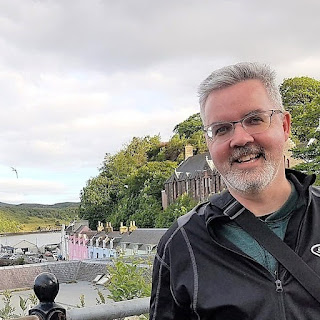 Joe Mahoney is a writer/broadcaster currently working full-time for the Canadian Broadcasting Corporation, where, for over more than three decades, he's worked in several roles including audio technician, recording engineer, sound effects, producer, and several operational management roles. He recently became Property Manager for the CBC’s eastern portfolio including Ottawa, Quebec, the Maritimes and Newfoundland.

And be sure to come back soon, because my next guest Nina Munteanu, author of Water is... and A Diary in the Age of Water, will be talking about how to work with editors.

Get the scoop on the new Dale L. Sproule novel, The Human Template at https://dalelsproule.com.