The Tyger at Twilight 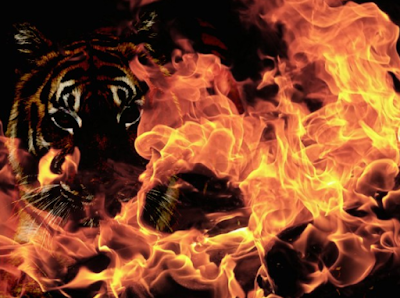 I am a follower of Nick Cave’s Red Hand Files. Who’d have thought a punk musician and former junkie renowned for the darkness and frequent violence of his shows and the visceral intensity of his song lyrics would ultimately become the poet laureate of agony aunts? Anne Landers meets William Butler Yeats? I’m sure many early Nick Cave fans consider this his ruination. And they are certainly welcome to that opinion and justified to the extent that the qualities that attracted them to Cave's work in the first place are gone – or at least mutated beyond recognition.

I think Cave’s new public persona is a brilliant demonstration of how much each of us can grow and evolve as individuals. Rehabilitation is not only possible for most people, it’s a natural process. Someone who was a real wild child can turn become an exemplar as an older adult (conversely, someone who was considered a paragon of virtue can turn out to be a scumbag – but that’s a whole different blog post).

But I'm not here to write about the manifold, systemic evils of the North American prison systems; I’m responding to something Cave said in a recent Red Hand Files post; where he was talking about mortality. He suggests that “the impermanence of things and, indeed, our own impermanence… ultimately animates and illuminates our lives. We become witnesses to the thrilling emergency of the present.”

You'd think the ride would get more thrilling as it goes along, but apparently we don't have the energy to stay on high alert indefinitely. As time goes on, the sense of urgency subsides. We let our flames go out and stray too easily to the darkness. Maybe that’s something the current world health emergency is teaching us;  to keep our wicks trimmed and our lighters handy. Hold that candle high.

A gentle and gradual guttering of the flame isn't inevitable. To conflate William Blake and Dylan Thomas, burning bright for so long takes a toll. After awhile we burn down like candles, turning to puddles and sputtering slowly into thin trails of black smoke.

As for myself; I didn't know it at the time, but maybe my tendency to hide my fire under a bushel and only relight it intermittently has prevented memory rings and left me with a nubbin of unmolten wax and a sturdy bit of wick. As Dylan Thomas urged, I'm planning to "Rage, rage, against the dying of the light" for as long as I can. Hopefully I’ve accumulated enough wisdom, humour, style and objectivity to go out in a blaze of glory. (or at least a nice bright flare).

There was another well known personage (the Lamb Himself) who counselled , “Nothing is hid, that shall not be made manifest.”

One manifestation, coming up!