Not long ago, I was going on about the importance of endings and how the recognition of the weaknesses in my original ending in The Human Template drove me to rewrite it. All well and good, but it leads into the next topic – on the dangers of rewriting.There are several levels of rewriting.

We're in home renovation mode lately at our house, so it was the metaphor that sprung most easily to mind. If you think of a novel as a house:

1)    There’s the complete teardown and subsequent replacement with a whole new structure.

2)    There’s your regular reno with repainting inside and out, plastering, filling of plot holes, and maybe a bit of roofing or sanding of hardwood.

3)     There’s the room by room remodeling meant to beautify and improve the existing structure that requires moving of furniture and selective repairs.

4)      And then there’s the spruce-up with new door handles, curtains, light fixtures and throw pillows. 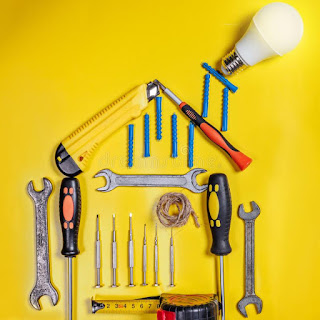 Laura, as my copy-editor, knew I was anticipating anything beyond level 4, so she felt bad about telling me about the level 3 issues she found with my shiny new ending. My renovations had included a great deal of detail work that was not only unnecessary, but confusing. Too much of this, not enough of that. There are places where I hammered in nails with the paintbrush handle. Those need to be revisited with a proper hammer. And since I was approximating paint colour, I should have expected the patches to look like patches.

It’s very easy to get yourself in deeper than you plan. You don’t want to find yourself repainting warped walls, or ignoring gaping holes in the ceiling because you didn't go to work with the right mental tools.

So sure, I added some cool stuff to the ending, upped the stakes for major characters and added some logical explanations to perceived plot holes. But in the process, I resorted to passive voice in too many places, summarized where I should have dramatized, got too ornate in some spots and not visceral enough in others. Sometimes I mentally budgeted for four hours of work when I really should have spent eight or 16.

The two biggest dangers with late-in-the-game revisions are not doing enough and doing too much. The former has you making changes in almost unnoticeable dribs and drabs. You may not make major mistakes or miscalculations, but that’s only because you didn’t accomplish much of anything. It’s always worth fixing errors and massaging prose to make it better, as long as you don’t come away believing you’ve done anything of consequence. The other danger is in making big changes to previously polished stretches of text. The tendency is to feel like you’ve taken something good and made it sublime. But it’s more likely that you have taken your excellent fourth or fifth draft prose and knocked it back to a first or second draft level. What’s worse is that it’s usually surrounded by the polished scenes and stands out like a bloodstain on a clean white sheet. You can go ahead and feel good about it – as long as you also resign yourself to the fact that it will take three or four or five more passes to bring it up to snuff.

Maybe on the revision after this, I can work on the landscaping and curb appeal!

Endings revisions writing
Psychedelia Gothique - Dale L. Sproule
I write literature of the fantastic. My short story collection, Psychedelia Gothique is mostly psychological horror. My just released novel, The Human Template is available through most online book retailers - and book two of the diptych, The Carnivorous Forest will appear in 2021. https://www.dalelsproule.com As a book reviewer I have written for Rue Morgue Magazine and AE Science Fiction. As a visual artist, I have illustrated books and magazines and have carved numerous sculptures out of stone.