Selling Sex in the Clear-Eyed 2020s

June 09, 2020
I'm far from the first person to note that sex sells, but it is an interesting item to update in this age of social consciousness.
I feel more comfortable tackling sexual subjects in fiction than in non-fiction. In fiction, there's always the defense that you as the writer are only reflecting a character's point of view or even commenting on or criticizing it by dealing with it in a fictional set of circumstances. It can be an effective tool to portray people on opposite sides of the generational divide.or to address issues like consent. It can come back to bite you if not done sensitively - or at the very least, alienate you from the very segment of the book buying public that you were hoping to attract..
Values that were considered liberal in the 1980s can come across as archaic in 2020. This can be a difficult thing for older people to wrap their heads around. As a member of that demographic, I can relate. ie: "My friends have always called me an advocate for diversity if not an actual feminist, and a few weeks back, my stepdaughter called me, the least non-binary person she knows?" How does that work? Well, despite her exaggeration to make a point, I will concede that adapting to this aspect of the modern world has not been particularly seamless or instinctual. But I have given it a great deal of thought and dealt with it extensively in my fiction - especially in the upcoming diptych.

To the Original Point; Sex Still Sells, but...

You just need to be extremely careful and sensitive about how you approach it.
For instance, the public still responds to pictures of attractive naked people but....
The definition of "attractive" is far more inclusive than it was 40 years ago. Big is more beautiful now than it was last century. Models like Melanie Gaydos, Christie Valdiserri, Harnaam Kaur and Winnie Harlow with all sorts of unique looks are becoming more common in the fashion industry. A provocative photo of a drag queen on a book cover may well be more acceptable these days than a picture of a beautiful woman in exactly the same clothes and the same pose. One may be considered exploitative, while the other is just mildly subversive. And to make the whole situation even more confusing; something you are celebrated for today could put you an a world of pain tomorrow. 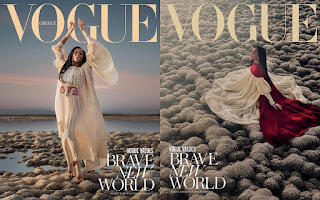 The lines are definitely blurred. Crossing them could make your career take off or could just as easily destroy it. Or neither - or both, as it plays out over time. Most likely it will just polarize your audience. Those who like the content and agree with your views will come looking for it and those who don't will be driven away and may make negative comments away from your forum. As the creator, you may not see what's happening or understand it if you do.

A model may be celebrated for putting it all out there, while a photographer or filmmaker may be reviled for putting similar images out in the world with less honourable intentions. Permission, motivation, and complicity can make a world of difference. Pretense is pointless. Your real opinion will come out, no matter how you try to hide it - or perhaps even because you tried to hide it. The less well known you are, the less demand there will be for you to take a stance.The only way to ensure you don't offend is to follow William Butler Yeats' maxim, "the best lack all conviction while the worst are full of passionate intensity."
Don't publicly challenge anything. Don't stand for anything, lest others turn on you for it. Don't mean anything to anyone in case you disappoint them. Don't adopt principals in case someone powerful considers them the wrong principals. Don't do anything, in case you should in retrospect have done something else.
Of course this means you eternally be living by someone else rules, governed by morals you may once have found repugnant. But if you don't stand for anything, you probably won't care.
Of course, if you have a manifesto that shows everyone else in the world how wrong they are, the very best thing you can do is probably to publish it. Then you can start the painful but ultimately rewarding process of finding others who agree with you.
We all have an audience. It's just a matter of finding it. And if all your followers are assholes, that too should tell you a little something about how the world perceives you.
Get the scoop on my new novel, The Human Template at https://dalelsproule.com.
blurred lines
Psychedelia Gothique - Dale L. Sproule
I write literature of the fantastic. My short story collection, Psychedelia Gothique is mostly psychological horror. My just released novel, The Human Template is available through most online book retailers - and book two of the diptych, The Carnivorous Forest will appear in 2021. https://www.dalelsproule.com As a book reviewer I have written for Rue Morgue Magazine and AE Science Fiction. As a visual artist, I have illustrated books and magazines and have carved numerous sculptures out of stone.