Beat the Book Pirates at their Own Game

If you're an artist of any stripe, you likely entered the "copyright" discussion based on your well-justified fear of having your pocket picked by unscrupulous plagiarists and resellers. As a typical creative artist you make a tenuous living from your avocation. If you're trying to survive on it, you are most likely living well below the poverty line. But most of us harbour dreams of making enough money from our art to give up our jobs in the real world. The faint chance of doing that becomes nearly impossible when someone finds a way to steal the food from your hand when it's still on the way to your mouth.

I pretty much made back the money I invested in self publishing my horror collection, Psychedelia Gothique before pirates made it available for free all over the internet. I haven't made a penny on it in years, but that's at least partly my fault. If I had done a better job of self-promotion and made a bigger splash on the front end; if I had continued to promote and get reviews for the book; if I had put out a second book hot on the heels of the first; any of those things would have increased the reputation and circulation of the book and assured that my income from it would be greater and would continue for longer.

Truth be told, the emergence of pirates might have cost me a few hundred dollars, but it probably paid at least some of that back in awareness by getting the book into the hands of another 50 or 100 people who now know my name or are familiar with my work. Not a terrible trade-off at my level. (ie pleased just to get my money back on a story-collection). But for those struggling to survive on the proceeds of your work, it's a horrible situation. You make a few hundred or a few thousand dollars before pirates siphon off all further profit. Gah!

The idea of devoting five years of your free time and energy to creating your magnum opus, only to have someone steal it from under you is frightening and abhorrent. No wonder we celebrate and zealously protect that perceived right of owning our intellectual property.

But you know what? There's almost nothing creators can do to actually stop that process from happening. In this age of ubiquitous internet, it is impossible for the average person to stop others from copying and sharing, and the effort to monitor and control it would not only violate everyone's rights and freedoms, but as Cory Doctorow extrapolated, "...if copying on the Internet were ended tomorrow, it would be the end of culture on the Internet too."

Like or not, piracy and plagiarism are part and parcel of the emerging paradigm.

Jonathan Lethem described the primary difference between actual theft and intellectual property theft. "... a car or a handbag, once stolen, is no longer is available to its owner, while the appropriation of an article of 'intellectual property' leaves the original untouched."

While that assurance may be true, it also leaves the original essentially valueless. If someone can get it for free, then why would they pay for it?

That's not just a rhetorical question. You need to really think about the answer. Figuring out what would actually get readers to pay for something they can get for free is the first step on the road back to profitability.

Doctorow was one of the first to find a way to work within that system. Although his publisher was skeptical, it allowed him to offer his first novel for free prior to its official publication. In order to get the work into as many hands as possible, he encouraged people to copy and share it on the gamble that if enough people heard of and liked it, some would feel obliged to pay for it. It worked for him and for a few other writers after him (like Brandon Sanderson's WarBreaker). But there are so many writers playing the same game these days, returns have diminished precipitously.

Which brings us back to the original question - what else would make an audience pay for something they can get for free? If it was a new edition of your book with more or different content, or with free giveaways on the side. If the one you were selling was a collector's hardcover. If you made five different versions available each with different bonuses and attractions. If there was a preferred or updated version.

New challenges often bring about novel solutions that work to everyone's benefit. I'm thinking here of remarks some artists have made about the positive aspects of theft in the arts.

"Plagiarism and piracy, after all, are the monsters we working artists are taught to dread," Jonathan Lethem said in his 2007 Harper's article, 'The Ecstacy of Influence.' Then he makes his point by asking us to "...consider the remarkable series of “plagiarisms” that links Ovid’s “Pyramus and Thisbe” with Shakespeare’s Romeo and Juliet and Leonard Bernstein’s West Side Story, or Shakespeare’s description of Cleopatra, copied nearly verbatim from Plutarch’s life of Mark Antony and also later nicked by T. S. Eliot for The Waste Land. If these are examples of plagiarism, then we want more plagiarism."

Musician Nick Cave recently said in his Red Right Hand online forum, “The great beauty of contemporary music, and what gives it its edge and vitality, is its devil-may-care attitude toward appropriation — everybody is grabbing stuff from everybody else, all the time. It’s a feeding frenzy of borrowed ideas that goes toward the advancement of rock music — the great artistic experiment of our era.

"Plagiarism is an ugly word for what, in rock and roll, is a natural and necessary - even admirable - tendency, and that is to steal. Theft is the engine of progress, and should be encouraged, even celebrated, provided the stolen idea has been advanced in some way."

Does that give you any ideas? How about a swap with another writer: you rewrite her book from your sensibilities and she rewrites yours in her style. Or you write sequels to each others books, or stories set in the same universe. All of these things could be marketed in different combinations and packages and breathe new life into your sales.

Following the old adage "if you can't fight em, join em;" maybe the best way to deal with the copyright conundrum is to come up with our own solutions. If we're going to live in an age when plagiarism and theft are inevitable - maybe your true destiny is to become the best plagiarist ever - right up there with Shakespeare himself. 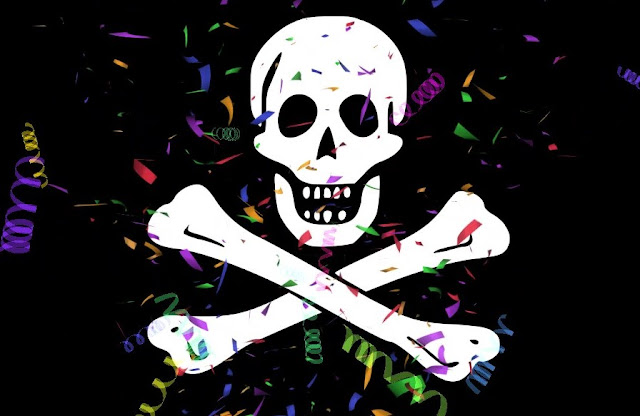 Get the scoop on my new novel, The Human Template at https://dalelsproule.com.
copyright
Psychedelia Gothique - Dale L. Sproule
I write literature of the fantastic. My short story collection, Psychedelia Gothique is mostly psychological horror. My just released novel, The Human Template is available through most online book retailers - and book two of the diptych, The Carnivorous Forest will appear in 2021. https://www.dalelsproule.com As a book reviewer I have written for Rue Morgue Magazine and AE Science Fiction. As a visual artist, I have illustrated books and magazines and have carved numerous sculptures out of stone.