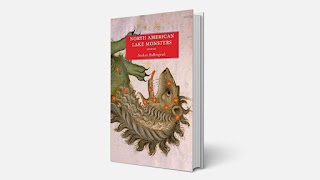 After reading the short story “Atlas of Hell,” in Ellen Datlow's Fearful Symmetries, anthology, I looked up Nathan Ballingrud on Facebook and told him how much I loved the story. He seemed pleased that I had responded positively to what he described as a real change of direction. I mentioned the story to several friends, one of whom told me, “You think that story was good, you should read his collection, North American Lake Monsters.”

I’ve been writing and reading horror since I was a teenager, and that book was unlike anything I’d read before.  Lots of people have pointed out over the years that horror is the only genre named after an emotional reaction. The stories in North American Lake Monsters are actually less about the monsters than they are about that emotional response. They aren’t just horror stories, they’re stories about horror –  the emotional fallout that monsters leave in their wake. It is riveting and devastating and merciless. It reminded me of nothing less than Flannery O’Connor’s short story, “A Good Man in Hard to Find,” which I consider one of the masterpieces of twentieth century fiction.

And Nathan was right. “Atlas of Hell” was indeed very different than North American Lake Monsters.  It was pulpy, action-adventure, noir and fun. Argosy horror with real imagination and some impressive writing chops. As such, it’s the perfect leadoff story for Ballingrud’s second collection, Wounds: Six Stories from the Borders of Hell.

While the stories in North American Lake Monsters had an obvious literary/tonal consistency, with all the stories hewing tightly to the emotional devastation theme, the stories in Wounds all hang out rather loosely around the gates of Hell – approaching them from a number of different directions. It’s a much more playful book, in that it allows Ballingrud to experiment with voice and tone. 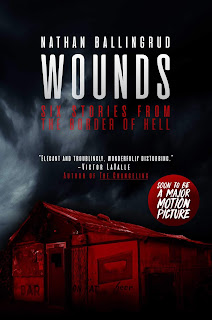 There is a pulpy adventure underlay to many of the stories even as they venture as far into darkness as anything I’ve ever read. One of the stories, “Skullpocket” has a real Tim Burton vibe. Another, “The Maw” feels like an alien invasion story – even though the culture encroaching on ours is one that has been on earth as long as we have. This collection is brave. It has no hesitation about rubbing our noses in “The Visible Filth.”  The novella was previous published as a chapbook and is about the darkness inside of us, just waiting to come bubbling out. It's creepy, disgusting and strangely compelling.

Laying them all out like this, I see at least one theme running through the collection – thinking that we can control the darkness is pure hubris. If you get too close to Ballingrud's darkness, it will swallow you whole.

The final story in the book is where the magician gets to stop playing with cards and wands and handkerchiefs and top hats and break out the most show stopping tricks in his big bag o' magic.

"The Butcher's Table" is a pirate adventure where the most vile character is a prissy British society gentleman who would do anything for love. And then there's a pirate captain who would do anything for love. Hmm - another theme emerging? It also has cannibal priests and the carrion angels, the the most terrifying creatures I have encountered in a modern horror story. The climax is set during a dinner party on the shores of Hell. If you like horror, read this book. Hell, read the last book too. And watch the television series based on North American Lake Monsters and Wounds, the movie based on The Visible Filth.

Ballingrud deserves the recognition he is starting to receive. A Nathan Ballingrud who is writing full time will no doubt be more productive - giving grateful readers like me lots to cheer about. 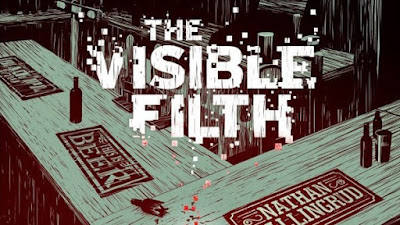