The Process of Writing

Unless you’ve studied engineering, you probably couldn’t build a ten story building, and no one would give you the resources to let you try. Unless you’re an experienced coder who knows something about user interfaces, you’re unlikely to unilaterally create a new computer app that anyone would want to (or could) use. You might come up with a great idea, but by the time you gain the skills necessary to turn it into something useful and readily available, someone else will have done it first, and probably better.
Hard skills – from driving big trucks to brain surgery – are not easy to fake.
So when you’re unemployed or unhappy in your job and you’re looking for some sort of outlet for your energies, you may start tallying up your skills and think, “Oh this skill isn’t current” or “I haven’t done that since college.”  But writing? Now there’s something we can all do! Hundreds of thousands of us write on a daily basis, we are all taught how to write in grade school. And most of us are fluent in at least one language.
To be fair, most people can write to some degree.  We write about the things we know, sharing our skills and opinions. And more and more in the age of Trump, we write about what’s important to us. Some of us write poetry, even if we barely understand the concept of rhyme schemes. We write stories like ones we’ve seen on TV. We write fan fiction and blogs and recipes and erotic fantasies. And we dream of penning the next breakout bestseller, becoming the next JK Rowling or EL James.

I remember sitting in an auditorium from my first year creative writing class, when the professor said, “You’re all dedicated to becoming professional writers, but I want to all to look around at the people next to you and behind you. Only one out of ten of you will ever have something professionally published. Maybe one out of a hundred will make any kind of a living from it. The rest of you will realize at some point how hard it is and will go do something else.”
Decades later, I’ve been pretty impressed by the number of people who’ve persisted – who found the hidden talent deep inside them and coaxed it out, and got better and better. The number of people who write well enough to make a decent of a living from writing probably hasn’t increased since my university days. There are just a few million more people between the average writer and the top rung. And as a consequence – the top is much freaking harder to reach. 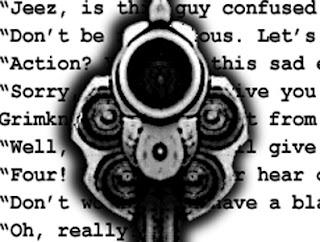 Most of us who write believe we are better than we actually are. But becoming a successful writer involves so much more than the ability to coherently put your thoughts on paper. If you’re funny and entertaining enough you may get by with not much more than that, but sooner or later most writers realize that – as in engineering – creating a solid story or novel requires an understanding of structure and involves a complicated and time consuming process. It’s hard work that offers poor compensation. These are the aspects of writing that most writers learn through a combination of training and experience. They are often hard won. And while they can be circumvented, if you ever hope to have a career as a writer, there comes a point when you have to find your process.

That’s the tricky part. The process is different for everyone. Telling you what works for me probably won’t be what works for you. Here’s what I have learned about my “process”:
For me, a first draft is little more than a raw idea, often a summary. First this happens and then this happens. This draft explains things rather than letting the reader experience them.
The second draft is just a clean up of the first, making things flow better, fleshing out the characters, making events more logical. Then I start looking for my hooks. I start looking for rhythm and adding it wherever I can. Rhythm is really important to me.
My characters don’t usually come to life until the third draft because discover the people behind the dialogue. I ask questions like “what kind of character would say something like this?” and what motivations might they have for doing this?” Why would this character react this way and what does it say about her and her relationship with the main character.”
Characters change to serve the plot, but it also works the other way. Relationships and relationship dynamics start to alter the shape and change the course of the story. The trick is holding it together when the story dynamics and the character dynamics clash. It’s hard to mold something that won’t sit still. Sometimes, it molds me, forces me to examine and change the structure so that the reader gets the necessary information at the right time to keep them intrigued so that everything aims at the same vanishing point.
For me, it’s pointless to worry too much about sentence structure, word choice, story rhythm and character arc until the fourth draft. If I’m really lucky, the fourth draft is publishable.
A fifth draft should shine everything to a high gloss – and if it’s not working at that point it’s best to rethink it from the ground up – which is sometimes worthwhile and sometimes not. Sometimes its better to just move onto the next story and revisit the abandoned one in the future – if it calls you back.

For me, the hardest thing in writing is admitting that making something work is beyond my grasp at that moment – and that I should – for  the sake of productivity walk away and work on something else.
I am buoyed by the knowledge that putting something away and not looking at it for awhile can enable me to look at it with fresh eyes a few weeks, months or years down the line. I often see the problems more clearly, which enables me to find the solutions.
This is my process. One thing I have learned in my years of writing is that everyone has a different process – and that process can change considerably from project to project. But knowing my own process helps me to just smile and say, “Oh well, it’s part of the process. I’ll have another look at that in a few months.”
It makes me glad I’ve always got lots of irons in the fire.
Republished from my Dream to Catch Blog 2013

creative process experience writing
Psychedelia Gothique - Dale L. Sproule
I write literature of the fantastic. My short story collection, Psychedelia Gothique is mostly psychological horror. My just released novel, The Human Template is available through most online book retailers - and book two of the diptych, The Carnivorous Forest will appear in 2021. https://www.dalelsproule.com As a book reviewer I have written for Rue Morgue Magazine and AE Science Fiction. As a visual artist, I have illustrated books and magazines and have carved numerous sculptures out of stone.