Transversions and Everything After 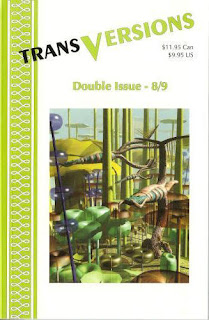 In the mid-1990s, Sally McBride and I dreamed up, published and edited a well-known and respected small press magazine called TransVersions: Literature of the Fantastic. Over the course of six years, we were fortunate to publish stories by new authors and established pros. Being one of the highest profile genre magazines publishing poetry, we received a wonderful offer from Governor-General Award winning poet and Canadian SF icon, Phyllis Gotlieb to become our poetry editor.

Over the course of 11 issues, we published stories by a pretty impressive list of authors, including Gemma Files - author of Experimental Film; David Nickle – author of Eutopia and Volk; Jeff Vandermeer – author of Annihilation and the Southern Reach trilogy; James Sallis – author of Drive; Robert J. Sawyer – author of Flash Forward; and over 100 others. Many of our contributors went on to great success (Sallis and Sawyer were already well known), with books and stories being adapted for TV and movies and winning most of the major genre awards, and even an Academy Award (for the movie version of Drive).

One of the aspects of producing TransVersions I enjoyed the most was doing the layout and serving as art director – with my own artwork occasionally gracing the covers. 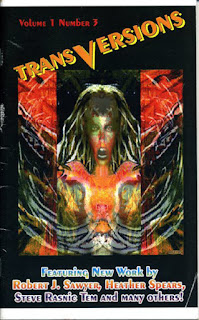 The perks of producing the magazine included opportunities to enjoy some instant credibility, being invited guests at conventions, drinking and dining with some of our favorite authors. Although we couldn’t get the likes of William Gibson, Guy Gavriel Kay, Kim Stanley Robinson and Robert Charles Wilson to write stories for us, we did manage to get a book review from Wilson, as well as an exclusive book except (that was cut from the final draft) from Sean Stewart, artwork from Charles de Lint and interviews with William Gibson (which appeared in Books in Canada) and another of our favourite authors, James Morrow.

There’s definitely something special about having authors you idolize complimenting your work.

The downside was that it gave me a disproportionate sense of my own “celebrity.”  While I was doing it, I felt like I was creating a legacy – a stepping stone that would lead to greater success. But all that credibility and forward momentum vanished, the instant that life challenges forced us to quit publishing the magazine (we sold it to new publishers who quickly decided that spending vast swathes of time producing a money-losing publication wasn’t really one of their favourite things either). It was a sobering reality check that almost convinced me to get out of the writing/publishing business forever.

Certainly there are artists whose legacies (even some consisting of one book or painting) are indisputable and others - as my own experience demonstrated - that created no lasting legacy at all. 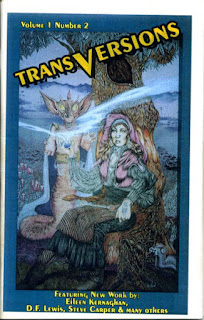 Although I’m glad that I didn’t drop out altogether, my expectations have pretty much spiralled downwards and stayed there. My advice to creative people everywhere: if you don’t enjoy doing it (writing, drawing, publishing, or whatever it is you’re doing) then don’t do it. Know that ‘success’ is both elusive and hard to hold onto.

If your sense of happiness and self-worth depends on external validation, then you’re probably wise to stay away. Although having said that, I can’t help but think of how much poorer we would all be if lack of acclaim during their lifetimes had convinced Vincent Van Gogh, El Greco, Henry David Thoreau,  Kafka, Poe and Emily Dickenson to give up. They likely had other motivations for carrying on though – muses that just wouldn’t stop whispering in their ears – urging them onward. 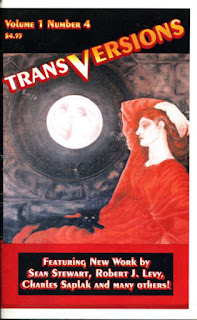 There are lots of valid reasons for following your muse:


Then by all means, carry on!

publishing success TransVersions
Psychedelia Gothique - Dale L. Sproule
I write literature of the fantastic. My short story collection, Psychedelia Gothique is mostly psychological horror. My just released novel, The Human Template is available through most online book retailers - and book two of the diptych, The Carnivorous Forest will appear in 2021. https://www.dalelsproule.com As a book reviewer I have written for Rue Morgue Magazine and AE Science Fiction. As a visual artist, I have illustrated books and magazines and have carved numerous sculptures out of stone.