The Value of Personal Networking 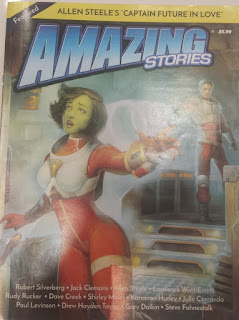 A few years ago, my friends, David Nickle and Madeline Ashby told me that if I was serious about getting back into writing, then in addition to establishing a strong social media presence, I need to be visible at events. Toronto is a great place to do that – with many literary events happening every month.

My work schedule (Tuesday through Saturday afternoons and evenings), made that goal impossible for years, but having recently moved to a daytime schedule, I am now endeavoring to get out more.

One of the first events I was able to attend was a re-launch of Amazing Stories Magazine at the Merrill Collection. It was nice to see friends I haven’t encountered in a year or more. And it was great to celebrate the rebirth of a publication that was a big deal to me as a young writer. But, as a networking opportunity, I suppose I was just out of practice.

Then this week, I went to a book launch. Michael Kelly of Undertow Publications – one of the most respected publishers of weird fiction in the world – was releasing Simon Strantzas’ new collection Nothing is Everything. I do not know Simon Strantzas, although I have encountered his work in a number of publications. He’s among a younger generation of horror writers – whose career has long eclipsed mine.

I have been quietly moving away from the weird horror genre, so despite having the opportunity to chat with the publisher, I will probably not be sending him submissions anytime soon. Nevertheless, he is a delightful man who publishes amazing books, so it’s always good spending time at events he’s hosting.


events in-person networking
Psychedelia Gothique - Dale L. Sproule
I write literature of the fantastic. My short story collection, Psychedelia Gothique is mostly psychological horror. My just released novel, The Human Template is available through most online book retailers - and book two of the diptych, The Carnivorous Forest will appear in 2021. https://www.dalelsproule.com As a book reviewer I have written for Rue Morgue Magazine and AE Science Fiction. As a visual artist, I have illustrated books and magazines and have carved numerous sculptures out of stone.