April 11, 2016
My dear friend, Sally McBride, recently introduced me to the concept of 100 word stories, called drabbles. Some drabble publishers insist that drabbles must be precisely 100 words not including title. Others include the title. And some say that approximately 100 words is good enough. I've gone with the first definition. 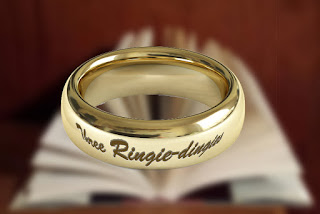 I have found writing these to be a wonderful way to creatively kickstart my brain and have written quite a number of the over the past few weeks. I expanded the definition a bit, writing a Double-Drabble. And here, making much ado about next-to-nothing, I am unveiling my epic Trilodrabble...

Fellowship is the Thing

When I was eleven, Uncle Bill gave me a ring. It left no black mark around my finger and had no gap at the back to accommodate my growing physique. It was real gold.

When I put that ring on, I became the opposite of invisible. My friends thought it was swank, and grown up jewelry turns girls on. I could do anything. So I never took it off – even when my finger started turning purple. Then black.

When the finger fell off, I threw it into a volcano in a desperate attempt to stop "the change" in its tracks.

The lava-spewing monstrosity was in a neighbor's yard, right beside a mountain of manure that had two flowers growing at the summit – incredible red flowers with stamen as yellow as the sun.

The girl I liked, Carrie, never looked at me anymore. So when I got down from the volcano, I decided I just had time before the school bus came, to pick her those flowers.

When I tried to give them to her, she told me I smelled like shit. And when I took off my shoes, she saw how big and hairy my feet are. Oh, well.

A male charm bracelet, I thought. Why not! It would be the next big thing. Swank. Sexy! It could have soldiers and baseball players, grenades, dice, pistols, celebrity clitorises and a variety of balls. Gold, silver, precious stones. I even dreamed up a little gold Elvis Presley – jointed, with swingable hips.

I convinced some investors it would make us all rich. We stayed the course, kept hoping it would catch on. We waited and waited, before we finally lost our shirts.

Too late to change course, or make a new plan. The die were cast. The King's hips were frozen.

Acknowledgements: The idea of celebrity clitorises from Nick Cave's The Death of Bunny Munro.
Psychedelia Gothique - Dale L. Sproule
I write literature of the fantastic. My short story collection, Psychedelia Gothique is mostly psychological horror. My just released novel, The Human Template is available through most online book retailers - and book two of the diptych, The Carnivorous Forest will appear in 2021. https://www.dalelsproule.com As a book reviewer I have written for Rue Morgue Magazine and AE Science Fiction. As a visual artist, I have illustrated books and magazines and have carved numerous sculptures out of stone.