Having seen the movie, The Witch, over this past weekend - I was impressed by its evocation of the 17th century - especially its depiction of how our faith governed every aspect of our values, our perceptions and our approach to life. 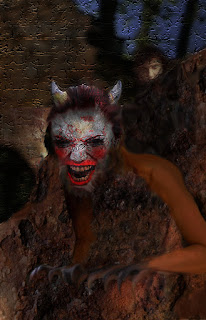 With no real knowledge or access to knowledge, those early pioneers were awed by and afraid of everything. Imagination blossomed and flourished in that garden of ignorance. Not knowing what was possible and impossible - made everything possible, everything real.

The sum total of individual knowledge was contained within our minds and within the pages of the one book most people in the new world had any access to - the Holy Bible. Civilization gradually changed all that. A proliferation of books from a huge range of experts and gifted scribes constantly set new limits and defined the boundaries of possibility. Humanity's growing knowledge base gradually eroded the power of religiosity and ignorance and finally brought our imaginations into check: the fantastic became mere whimsy, monsters became metaphorical and we lost our fear along with our sense of wonder. Anything that went against accepted truth, or which seemed to be unprecedented – was regarded as suspect. We had the hubris to think, "How can any condition exist in the real world without having been documented by now?" We could indulge in fantasy with the certainty that it wasn't real. Spiritualism became a retreat for those bored and repressed by the suffocating weight of knowledge.

A similar restlessness, curiosity and yearning for the excitement of the unknown led us to seek out things we did not yet know for certain - to invent new challenges and try find new roads forward.
In the mid-20th century, science fiction gave our imaginations someplace to go that was largely ungoverned by our prejudices and our then-current knowledge. It egged the actual scientists to push harder and go further. In that way, speculation allowed us to open new doors and examine new possibilities. And to look again into the vast and mutable face of the unknown. The thrill seekers and adventurers among us quivered with joy.

And our knowledge-base kept on growing and growing and growing. The computer revolution at the end of the millennium made all history, literature, math, geography, science and speculation available to everyone. But the unstoppable onslaught of information forced us to develop and use filters. No human mind can contain more than snippets of the vast knowledge now available to us.

The next great flood does not involve water.

Knowledge is becoming our enemy - because we don't know what to do with it all - other than sift through it endlessly. Reduce it to the finest grains. We may glean nuggets of insight, which will seem like nothing measured against the knowledge we already have. But all it will leave behind is quicksand - absorbing everything without a trace.

No human can comprehend the singularity that is well and truly upon us. It's like trying to understand God or infinity. The vastness renders us insignificant, reveals us as pilgrims shivering and praying at the edge of the wilderness - clinging to our own stubborn truths because we dare not open our minds to what they cannot possibly comprehend.

The rejection of the unprecedented is our knee-jerk reaction to being thrust into an uncertain future. We retreat into the tried and true. We hole up in our little hovels, afraid to go out, because the woods are full of witches. We may even turn out to be witches.

As the father in The Witch might have said, "That's what comes of going beyond our station."

Mere humans; we can't hold a book and absorb its contents. We need to read one page at a time. No one can wish their way to the top of a mountain. No goal worth achieving can be reached holistically - but only by figuring out the next handhold, placing the next piton, taking the next step that needs to be taken, to scale this one small cliff face. And then we can think about the next and the next.

If we have mastered any one skill as a species, it is the skill of reductionism - of thinking small and taking one step at a time. So I wonder that we don't have a greater appreciation for the little things: the snippets of wisdom the eldest of us have gathered in our long lives that can help our children to move into the future, inspired rather than overwhelmed by the manifold possibilities.

There is a way forward - a place we can go where the old rules no longer apply. But once we go there, we will no longer be human.

opinion review the witch
Psychedelia Gothique - Dale L. Sproule
I write literature of the fantastic. My short story collection, Psychedelia Gothique is mostly psychological horror. My just released novel, The Human Template is available through most online book retailers - and book two of the diptych, The Carnivorous Forest will appear in 2021. https://www.dalelsproule.com As a book reviewer I have written for Rue Morgue Magazine and AE Science Fiction. As a visual artist, I have illustrated books and magazines and have carved numerous sculptures out of stone.