Skip to main content
November 06, 2013
Over a week since I released my collection, Psychedelia Gothique and I have to idea whether anyone has even bought a copy!
More than a little anticlimactic given the amount of work and love and enthusiasm that has gone into it.
The process has taught me so much so far and it's really just beginning. As much as you hear about things going viral and people getting rich or famous overnight, I think the process of becoming a successful writer/artists and amassing fans is becoming more important than ever. I think you can build a reputation now far more easily than in the past. But it still comes to you one fan, one reader one helpful colleague at a time. And given how long I've been out of circulation, any success I manage to achieve won't come overnight. By publishing five stories directly to my collection, I bypassed the opportunity to showcase them in places that have already built audiences. The only surefire way for me to get those stories to the masses (rather than just the twelve people who buy my book) is to have written something worthy of selection to a "best of" anthology. I certainly tried to do that, but I have to come to terms with the notion that if I didn't succeed, the contents of this book will fade away faster than a stick-on tattoo.
Ouch! 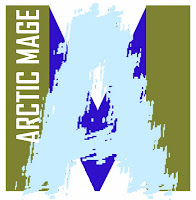 But true. lol.
So what do I get out of it?
Well, I've established my own imprint and even designed a logo. There may be some potential there!
I've started building a network of contacts and reviewers. Granted, it may take me three months to get a review and it won't necessarily
be positive! But still. Now that I have a collection under my belt - and one that I know is good - I am more comfortable networking with my peers. And nothing but good generally comes from that activity - especially when those peers include so many of the people involved with the celebrated ChiZine (three world fantasy awards this years!!!) I got practice using In Design (my PageMaker and Quark skills are no longer in demand). I learned how to make publishable pdfs and epubs. I get to hold my book in my hands and be proud of it. the act of choosing, revising and writing new stories has completely reinvigorated me and spurred me to finish numerous Works in Progress.
And a still may get a story showcased or win an award of some kind - who knows? At any rate, my first fiction title is now out there and available to the masses. The first of many.
Like a told a young writer on Wattpad who wanted to enter her story in an Awards competition but was afraid it would embarrass her...
entering that story signals your intention to make the world sit up and take notice. It announces your dedication as someone who is seriously interested in getting better. And I hope you are embarrassed. You want to be able to look back in five years and see how much better you have become. It should also give you an idea of how much better you need to get!
Psychedelia Gothique - Dale L. Sproule
I write literature of the fantastic. My short story collection, Psychedelia Gothique is mostly psychological horror. My just released novel, The Human Template is available through most online book retailers - and book two of the diptych, The Carnivorous Forest will appear in 2021. https://www.dalelsproule.com As a book reviewer I have written for Rue Morgue Magazine and AE Science Fiction. As a visual artist, I have illustrated books and magazines and have carved numerous sculptures out of stone.