The Future of Publishing

July 16, 2013
When a new book appears in the bookstores, what happens if audiences ignore it?
It vanishes quickly and ignominiously. A few weeks on the shelves (max), then down it comes. Traditionally, the covers were torn off and the book was sent back to the publisher. That's it. No second chances, no mercy, no pardons. And what are the chances that the publishers would carry on and publish your second book?
Diminished is a good word. If you were lucky, your chances were diminished. If the reception was exceptionally silent, you were screwed. The chances after that of any other publisher putting out another book by the same author?  Pay attention. I said "screwed."
So what I'm saying is that in the old days, writers and publishers had one shot - one chance to get it right.
The world of e-books is somewhat kinder.
Granted, big advances for unknown writers may be a thing of  the past. And you still may never sell any books. Nothing like getting a royalty cheque that won't cover a McDonalds Happy Meal. But your book will remain available pretty much indefinitely. Your publisher probably still won't publish your second book, but there are other options available to everyone - like going to a tiny boutique press or even self-publishing. 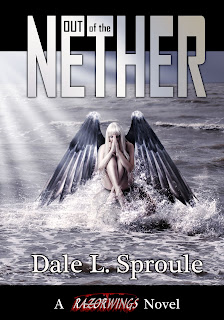 Which is why I'm so excited about the potential of Wattpad. Last week I mentioned how I made the opening chapter of my novel available on Wattpad and how I plan to serialize it. Those plans are still on despite the fact that the first chapters have not exactly set the world on fire. In fact, nobody has read it. If I was an old-time writer, I'd already be an ex-writer.
But what I now have a chance to do is analyze why no-one has read it. Bad cover art? A crappy teaser blurb? A bad choice of "book jacket photo"?  Yes!  All those things and more.  And I get to try again. And again. Until I get it right. New cover?  Check!  New profile? Check!  New blurb? Done. And I'm prepared to keep trying, polishing, honing, making friends and allies. By t he time I get the book on the market. Hundreds of people will have heard of it. The cover will be professional and will have proven its ability to capture people's attention. And the writing itself will have received all sorts of valuable input from the people who are most likely to buy it in the marketplace.
The other really exciting thing is that even after it's out there - being offered on Kobo and Amazon, it can still be tweaked or even changed.
An author who is willing the learn has an exponentially better chance of success now than writers from even just 20 years ago.  Contrary to what you may hear or fear, now may actually be a very good time to be a writer.